Fair Warning: this post is over one year old. The information in this post is probably still as accurate as when it was originally posted, but things do change quickly. Please keep that in mind while reading, and thanks for understanding!
A Quick Diversion:

Alas, the day has finally come: my local McDonalds is finally and completely out of their Pokémon Promo packs! :'( :'( :'( But, this day had to come.

This actually is a slight bummer, because ultimately I was not able to finish off the McDonald’s Promo page! In the end I didn’t get the “Light Black #1” nor the “Dark Green #4” packs, as well as the #3 vinyl stickers for Gens 4 and 8. But to be honest, dang near 24 days of non-stop Pokémon toys, especially when a lot of stores were left out in the cold… I can’t complain! And for those who missed out, I’m just hoping that my page about it helped you experience it virtually. Heck, maybe I’ll be able to find my missing pieces in due time!

One final “love letter” to this promotion is also still in the works… now that I got a lot of copies of the same card, I can… well, you’ll see when I finally release it. ;)

Yeah hey so, part of the reason why I did my little repair job over the last couple days was partially to let some new Pokémon Legends Arceus theories and ideas build up… and boy did they! Once again, PA! Discord member ElementsnStuff is still over at the The Research Sector and we’ve been knocking our heads together in trying to work out what the Sinnohese text found in the trailers means. On top of that, he’s had a few other interesting ideas and theories that I’ll share with you as well.

ElementsnStuff has been a font of great ideas, so I can’t thank him enough for his brilliant brainstorms. Here’s some of the main points that make the most sense to me. If you need a refresher on what happens in the PLA trailer, you can take a look at it again below:

Probably next time I’ll cover Sinnoh history and share some ideas of what might be covered in this game!

Now one thing I forgot to cover last time about the Sinnohese translations is, well, how the heck do we even know what’s what? Well, to be honest, a lot of it is based on how we know what we know about Galarian: we just match words up with what seems to make the most sense. In the case of Sinnohese, there are three signs seen in the Pokémon BDSP trailer which are the most authoratative and form the foundation for everything else… so far. These are:

There’s only one minor set back… nothing else seems to match up!

See what I mean? So, as you might have figured out already, this is looking like Sinnohese is very much like Galarian, in that both are “consistent gibberish”: there is some degree of similarity that they RESEMBLE a word, but no actual translation can be pulled from it. But I’m not gonna let that stop me; afterall, we wouldn’t have our gigantic list of Galarian Words if we gave up so early. And if it’s gonna be like Galarian, then Sinnohese will still at least have certain words which remain consistant in every place it’s seen, such as character names and Pokémon type.

One other thing: I’m putting my money on the Professor’s name being Cypress, given the name of Team Galactic’s head of “Cyrus”. But this isn’t just a blind guess here… by the looks of it, the Japanese word for cypress tree is hinoki (ヒノキ), and this bears some similarity to a nameplate seen in the trailer:

What do you think??

There’s also a good chance that the Red sign seen on one of the houses might be the Pokémon Center. Specifically, since at least Sun/Moon, the official acronym for it is “PMC”, and the Red Sign has three characters. This might just be a coincidence, seeing as all other signs point to Sinnohese being syllibic. Furthermore, in Japanese the Pokémon Center acronym is Pokesen (ポケセン), which is four characters.

Nameplates on the Doors

Speaking of nameplates… one thing that ElementsnStuff brought up is the fact that the nameplates seen by the doors in the PLA trailer is based on the Japanese practice of placing nameplates (hyousatsu, 表札) next to their front door. You can see the screenshot from the trailer below…:

…and then see how it compares with real life examples. The picture below, in particular, is sourced from this article about its prevalence in Japan as opposed to in Western nations. 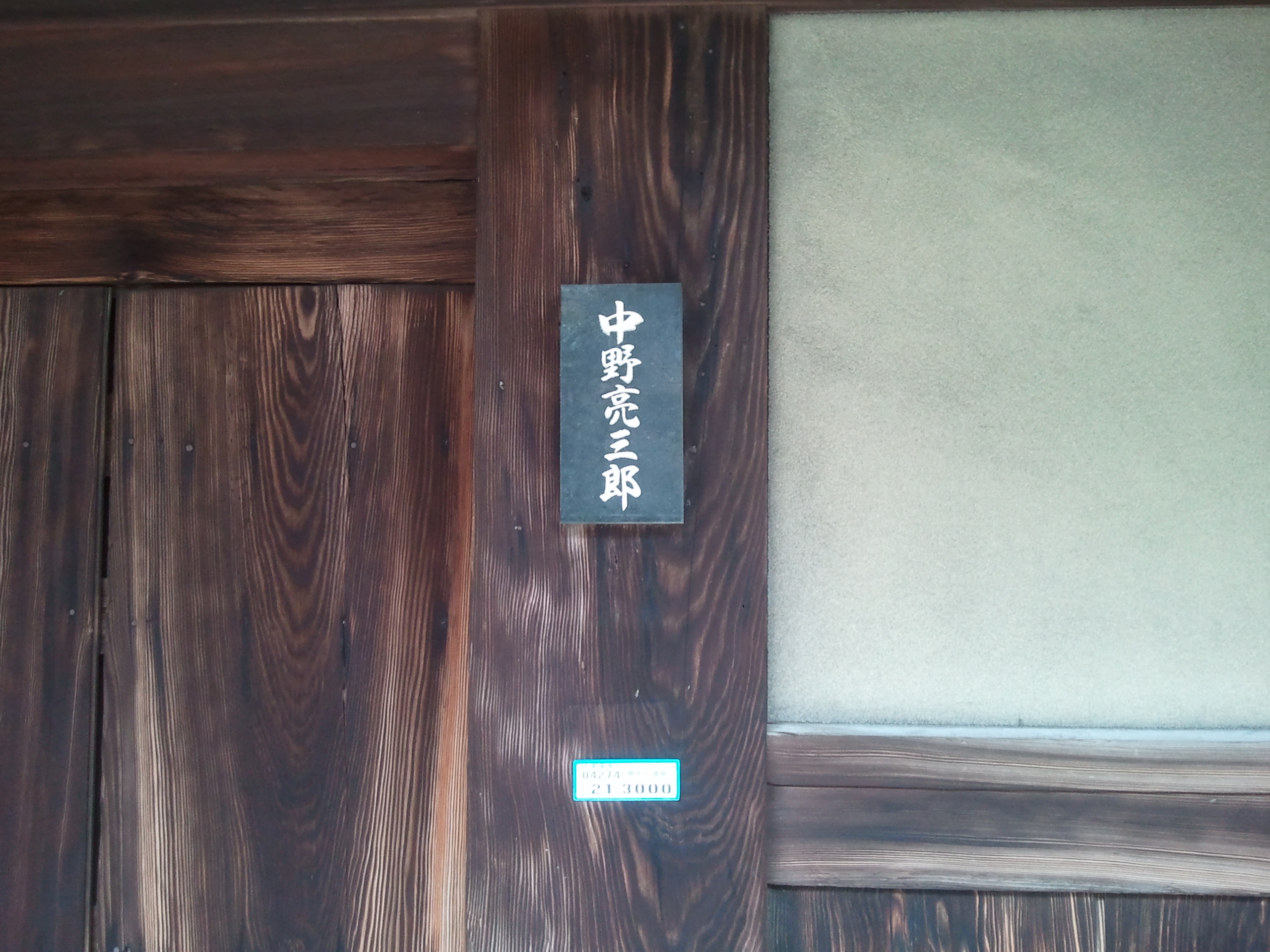 Now the reason why it’s important to bring this up is the fact that this custom actually dates from the early-20th century, as opposed to the pre-Meiji Restoration era of the mid-19th century. Specifically, this sprang up after the 1923 Great Kanto Earthquake, which means that it wouldn’t have been seen in Japan at that time. Heck, IIRC Japanese commoners weren’t even allowed to have family names or surnames—let alone have one to pin up on their doorway—until well after the Meiji Restoration (1868); it wasn’t until 1898 when the Japanese gov’t, as a way to modernize and Westernize the nation, allowed families to have surnames… which led to a slew of some of the most boring family names—basically the Japanese equivilant of “Smith” or “Miller”—where all they did was basically described where they live, like “stone field” (Ishida, 石田), “between the mountain” (Nakayama, 中山), “mountainous field” (Yamada, 山田), “in the middle of town” (Nakamura, 中村), “the base of a mountain” (Yamamoto, 山本)…

Me personally, I think this is more of a modern contrivance being added to the game more than anything… afterall, how else are we going to know if we’re walking into a Pokémon Center? But that said, it may also be a sign that, instead of this game taking place in any one specific era, it’ll instead take place in more of a general time range, say between the 1850s and 1930s. That is to say, when you think of “the Old and/or Wild West”, with its cowboys, cattle rustlers, saloons and shoot outs at high noon… you’re probably not thinking of it as taking place at any one specific time period, like say “pre-American Civil War but post California Gold Rush 1850’s”. Instead, you’re likely thinking of it in more generic terms… like, it wouldn’t feel too far off to see the Pony Express and a wagon train going past some telegraph poles and railroad track, right? Even though the Pony Express only existed due to the LACK of telegraphs, and wagon trains were obsolete once the Transcontinental Railroad started… but none of that matters because they all mix together into this homogeneous concept of what “the Wild West” was like.

So probably the same thing is happening here with what’s going on with PLA: considering that the “Meiji period” of Japanese history is between 1868 and 1912, the game might not be TOO focused on recreating the Pokémon world’s version of the Tokugawa Shogunate and the years leading up to (and past) the Meiji Restoration, but is instead telling a story in very broad strokes based on the general concepts of the era between the 1860’s and 1910’s of Japan’s history. In fact, it’ll probably resemble the classic segment from the 1987 OVA Robot Carnival, “Strange Tales of Meiji Machine Culture: Westerner’s Invasion”, written and directed by Hiroyuki Kitakubo, which is a Meiji-era story about two fighting robots, one from the East, one from the West. You can watch it below (don’t worry, I fast-forwarded to the part; if it doesn’t work, it starts at 1:02:34).

If you can’t watch it, you can at least take look at these screenshots, so you can get an idea of what I’m getting at:

Now compare those screenshots with a small excerpt from the PLA trailer showing the Professor’s office deep in the background:

There’s definitely a sort of “old style” look to it, but also one that looks like it was just built, say because they’re part of the government trying to look as Westernized as possible and that’s the side that just won control over Japan’s future. Incidentally, you can also clearly see the post that Rowlet likely perches on.

But hopefully you can see what I mean here: the nameplates on the doors are most likely just a bit of modern anacrhonism which still at least promotes the idea of the story taking place in a Tokugawa/Meiji-esque era, albeit in broad strokes. Which, honestly, all fine with me… because it’s taking place in the Pokémon world, the devs don’t need to worry too much about being historically accurate, even if they realize that there are still some tropes about the Tokugawa/Meiji-era that are still expected—as seen in the Robot Carnival segment above—in the same way “The Wild West” still has an expectation of Winchester rifles and six-shooters, not AK-47s and F-15s. I mean, unless you want to see that:

Phew! What a post. But that’s STILL not everything! Swing by next time and I’ll cover the different Sinnoh legends and stories which might make an appearance in Pokémon Legends Arceus, and see if maybe it’s something worth looking forward to, or maybe it’s best left in the history books. Be here or be… square? What shape rhymes with “here”?? “Squere”? “Squirrel“?